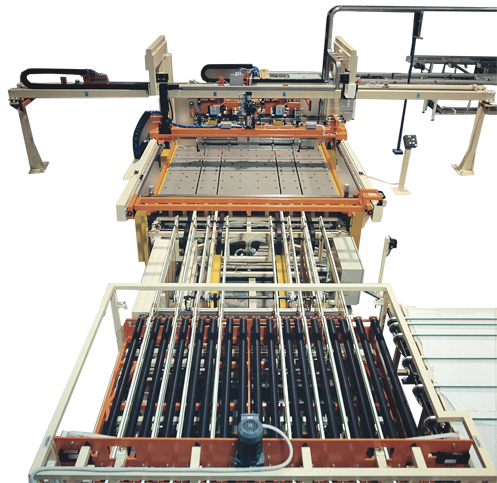 For long time, the model GHS 200 and GHS201 has been a dream for a lot of printing machinery manufacturers: in the past, other manufacturers failed where we succeeded. The model GHS200 can only process two glass parts at the same time, whereas the model GHS201 can process both one-up and two-up glass sheets. Both models GHS200 and GHS201 can process two glass parts simultaneously, but in former the two sheets proceed side to side, while in the latter the two sheets follow one another. What allowed us to be able to develop this new machine is a basic concept: the two glass sheets running parallel (GHS2100) or subsequent (GHS201) to each other on a line must proceed independently. That is the only way to maintain the ± 0.15-mm standard printing repeatability, since the machine must be able to somehow compensate the possible inaccuracy of screen manufacturing and the artwork has to be etched on the same screen for both glass parts. Indeed, with AISA’s auto-centering system it is possible to have two independent auto-centering devices, each dedicated to one glass part. The concept of centering the glass instead of the frame makes it possible to have two completely independent sheets, and the quality of the screen will no longer be a worrying aspect. Also the entrance conveyor is split in order to put the two incoming glass parts at the same level. The printing bridge is controlled by a numerical axis. The interference of the squeegee with the glass surface can be accurately controlled by means of two knobs with a digital readout (ring nuts on model GHS201) located on the two sides of the squeegee. In order to clean or inspect the screen, the screen frame is mounted in a special master frame that features three openings for the three pins in the machine to which the master frame aligns. These reference points allow the screen to be removed from the printer at any time (e.g. for cleaning and servicing) at a height of about 1200 mm and then reinserted without losing its reference position.